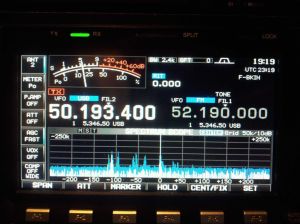 Sunday I had a chance to work a bunch of stations on 6m.  I only have a vertical antenna, but that didn’t seem to matter much.  I was able to work several stations that were participating in the ARRL VHF June 2012 QSO Party.

I haven’t worked very many stations on that band before, so this was a nice opportunity to work other stations on 6m.  The 6 meter band is nice because it is so quite compared to other amateur bands.

Sunday afternoon, my friend Jeff N9IZ told me about the QSO party and that 6m was on fire.

Overall I made 24 different contacts on 6m.  All these stations were participating the contest even though I really was not.  I did exchange my grid locator number so that the contact with me would count on their log.  Most stations I contacted seemed to be to the west in Colorado, or to the east in New Hampshire and Connecticut for some reason.

I believe that the upcoming storm may have changed some of the air temperatures creating  Tropospheric ducting.  This type of propagation makes it possible to communicate with stations way beyond the horizon.

I spent several hours playing on 6m, and at times I really needed to be patient to get the contact, but in the end it payed off nicely.

I had a great time and will participate again!