A tale of two Drakes.

Recently I found myself with some extra money that of course for an Amateur Radio op, just seems to light a fire right in your pocket when there is some sort of hamsexy radio gear around.  The conflagration of my wallet started when my very good friend Jeff N9IZ and myself took a trip over to another collector’s home Ward K8FD.  Ward is into collecting military radios and wanted to clear out bits of his other collection to facilitate his collection of military gear (when we visited we saw 6 R390’s there).   Ward had a complete C-line set that he was wanting to part with, and with my trusty wallet on fire I was soon carrying the C line out to the car. 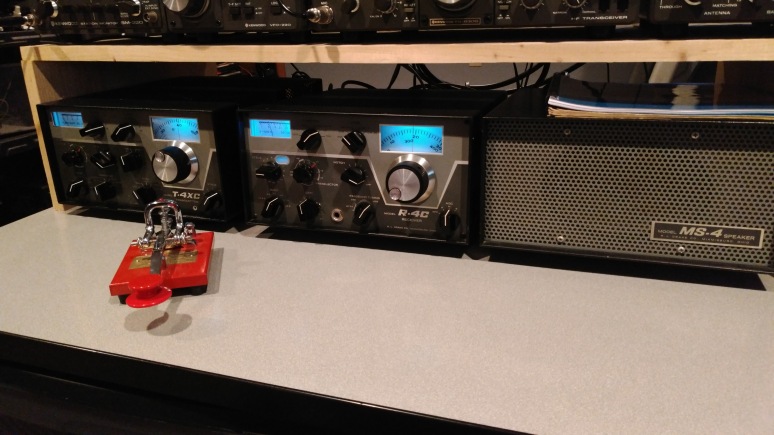 When I got my haul back home I did bring up the AC4 power supply, the R-4C and the C4 up on a variac.  I first connected the AC 4 to the variac and also connected my Fluke ammeter so that I could monitor the current.  After about 24 hrs, the power supply and the other gear were all brought up to modern line voltage on the variac (120 VAC).  Since there were no sharp increases in current, and nothing went “bang!” and let the magic smoke out, I figured I was good to go to bring them on the air.

I didn’t have a microphone for this gear yet, but my friend Jeff N9IZ was kind enough to let me borrow a Sure 444 microphone so that I could get them on the air.

After getting the myriad of interconnecting cables plugged in and working I was ready for my first QSO using this old gear.

My first contact with the Drakes was with W5FMX Scott – in Texas on 7/4/2017.  I had an excellent signal report and Scott told me that my audio was fantastic.  After hearing the encouragement I went on to make about 25 more QSOs (many with the 13 Colonies special event stations) of which I made about 5 DX contacts on 20m.

I love collecting radios.  I decided perhaps the Drake line of gear was for me.  It is a bit cheaper to collect than the Collins stuff and is fairly available at hamfests and online at places like QRZ Swapmeet and QTH Swapmeet.

Tuning up old tube radios is a lot of fun.  These older radios require a bit more interaction than newer radios.  But that is some of the fun.  I’m always tweaking that preselector on the R-4C along with the tuning dial to get stations tuned in just right.

Recently I just purchased a used ElectroVoice 664 microphone to use with the Drake station.  This microphone was first designed in 1955, and was sold until the early 1960’s.  A thing of beauty, the chrome microphone sitting on it’s grey base brings a smile to my face every time I lay eyes on it. 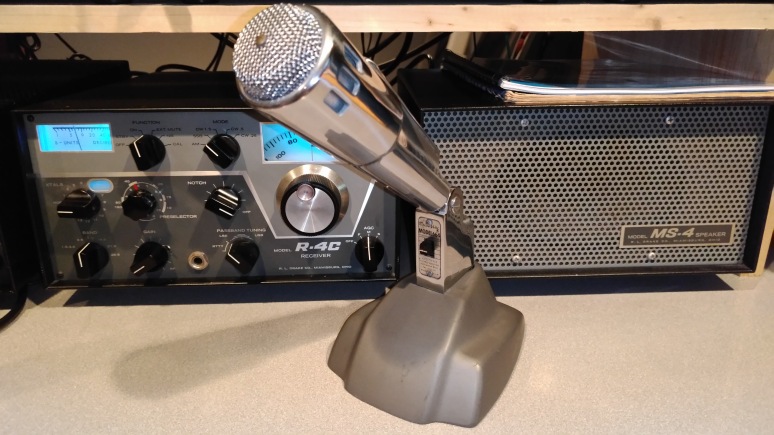 The EV664 is a unidirectional cardioid dynamic microphone.  They were sold for use as a general purpose/communication/PA microphone.  Big and beefy there is no plastic on this microphone (well, except for the small switch).  It weighs in at a hefty 1 lb, 12 oz (without the base).  The 419 desk stand is also a heavy chunk of metal weighing over 2 lbs.  This isn’t the type of microphone that you are going to just knock over.  If you were to say drop this on your foot, your toes would most likely be broken.

I did order some cable for this guy so that I can get it cabled up.  I think I am going to have to wire up also a foot switch for this since there is no PTT (push-to-talk) button and I really don’t want to mod the base with a switch.

I am having a bast operating with this gear, and when I get some more of the station setup, I will write another post.  In the mean time, 73! and gud DX.